August 5th 2016 – will go down as one of the best days of my life. My favorite band Pearl Jam was playing at iconic Fenway Park in Boston for the first time in their 20+ years. I live about 45 minutes north of the city in New Hampshire. So naturally when I heard they were doing a stadium tour and stopping in Boston, I bought tickets immediately. This was one of those moments you say to yourself, “there is no way I can miss this. I don’t care what the cost is”.

Fast forward…I missed the show last minute, but instead of a cost it was a reward.

Before I share what the reward was let me at least share a few things about why Pearl Jam in Fenway Park is a big deal. First off Pearl Jam is in my mind one of the best rock bands of all time. They recently got inducted into the Rock and Roll Hall of Fame, a prestigious honor that solidifies them in the history books. But for me it is even bigger than that. I graduated high school in 2003, so realistically I started to identify my taste in music probably around 1998 or so while in middle school. There were boy bands and Britney Spears to fill the pop genre, 2pac, Biggie, and Bone Thugs for rap, some one-hit wonders like Chumbawamba and Mambo Number 5 and the heavy radio play bands like Matchbox 20, Blink 182, Oasis, and Linkin Park. But just 8 years prior there was a genre of music that was gaining mainstream play that would forever change my life: grudge. Alice n Chains, Sound Garden, Nirvana, Silverchair, yes even Creed (My Own Prision only) and the greatest…Pearl Jam. The raw, in your face, rebellious music that got your heart beating and first pumping paired lyrics that are none other than masterpieces. You can only wish this was duplicated in today’s music.

Secondly, it is Fenway Park home of the Boston Red Sox. There are only a few iconic places in New England that compare. The smell of the grass, the roar of the crowd, the feeling when you walk in you are taking a step back in time. Yawkey Way, Sweet Caroline in the 7th, all of it. One of my favorites places on earth.

I actually was introduced to Pearl Jam by a close friend working in the kittchen at a nursing home. Best job you can have as a teenager, but that’s another story. We would crank music while cleaning dishes. Listening to ‘Ten’ from start to finish while pots and pans from old meat loafs were stacked to the roof. This was the only fuel I needed to get the job done. There was nothing like it. Every song was so filled with amazing lyrics, memorable guitar riffs, and music that was different. I was hooked.

Eddie Vedder Stage Dives – watch this when you have 5 mins. Amazing.

So fast forward 15 years later. They still remain my favorite band. Why? Because they have grown with me. 20 years they have come out with album after album of good music. Yes, there were a few years were you could tell they weren’t the same Seattle grudge band that made them famous, like ‘Backspacer’, but each album had a different feel and life application. Their most recent Lighting Bolt is actually one of my favorites. I had the chance to see them in Worcester, MA with Nicki for the first time the date they release the album. Here is my Facebook post from that day.

So as you can see I am a huge fan. So when I found out about them playing Fenway, I couldn’t miss.

August 5th, 2016 was one of the best days of my life. Not because I was standing there singing at top of my lungs in Fenway Park singing ‘Better Man’ with 40k other die hard fans but because instead I was sitting next to my wife alone in a hospital room, holding her hand as she brought our 2nd child, Bennett Grey, into the world. His birth was a moment that made me want to be a Better Man. I have the souvenirs, posters, and a T-shirt from the show thanks to a friend that lived in the city but more importantly, I have a memory that will last me a lifetime. Random fact but I sold my tickets to my friend who introduced me to them.

Two days later we came home with him and I had the chance to watch the concert from my living room while holding him. There was nothing like it. 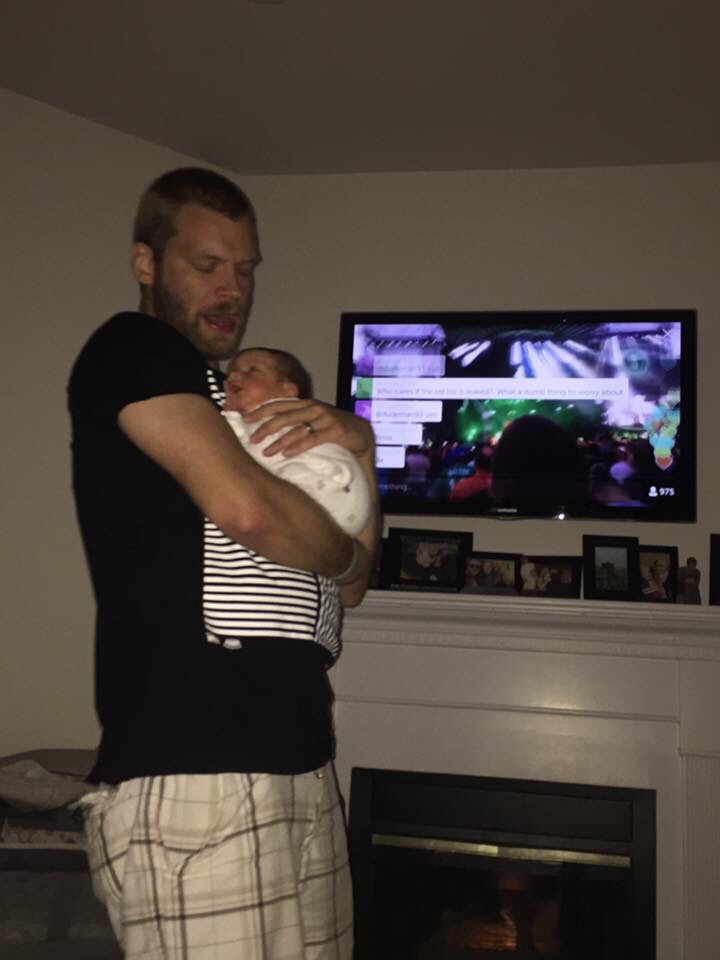 Well, I am sharing this story because I just found out this week that Pearl Jam is returning to Fenway for two shows this year and I got tickets! I can’t wait to go but will always cherish the day that I had to miss the greatest concert, for the greatest gift on earth- my child.